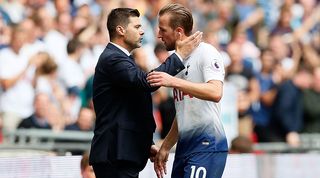 Harry Kane is in a race to be fit for Saturday's Champions League final, but Mauricio Pochettino is unsure whether to start him.

Speaking to the Guardian, Poch summed up his dilemma fairly matter-of-factly: “Whether to start him is a point we’re thinking about a lot. It is a decision that, one way or the other, will be judged after the game. If we win: fantastic decision. If we lose: shit decision, and you are going to kill me."

Whether or not Kane starts might not worry Spurs fans all that much. In the games he's not played this season, their win percentage actually increased from 61.5 to 66.7.

In his absence, players like Lucas Moura and Son Heung-min have more than filled the void, with Moura's incredible hat-trick getting them to the final in the first place.

But, in the biggest game of Spurs' history, it seems destined that the man who personifies their recent surge should play a part.

Whatever the result, Poch is clear that this is the beginning of something, not the end, and also seemed to pledge his future to Spurs, despite links with other top European clubs: “The moment that you reach the final, it’s like: ‘I want to be involved in the next chapter of the club’."