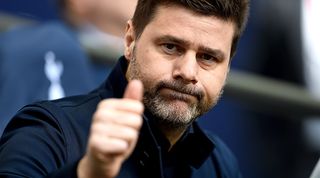 Tottenham manager Mauricio Pochettino has been handed a two-match touchline ban and fined £10,000 by the Football Association.

Pochettino has been punished for his improper conduct charge and will have to sit in the stands when Spurs return to his former club Southampton on Saturday as well as their trip to Anfield.

The Argentinian, whose side reached the Champions League quarter-finals with a 1-0 win at Borussia Dortmund on Tuesday, was sanctioned by the FA following his clash with referee Mike Dean after the 2-1 Premier League loss at Burnley.

Pochettino confronted the official about a decision that led to one of Burnley’s goals before getting even more irate after Dean appeared to make a comment.

A statement from the FA on Wednesday read: “Mauricio Pochettino has been fined £10,000 and will serve a two-match touchline ban following an Independent Regulatory Commission hearing.

“The Tottenham Hotspur manager accepted an improper conduct charge from The FA, which resulted from his language and/or behaviour – both on the pitch and in or around the tunnel area – at the end of the game against Burnley on 23 February.”

Pochettino has declined to reveal what Dean said but accepted the charge last week.

He inadvertently revealed he was to be punished during his press conference in Dortmund after Harry Kane’s second-half goal earned a 4-0 aggregate win.

Pochettino misunderstood a question, letting slip what was coming his way and revealed his discontent.

“I am very disappointed, I don’t think that is going to change but I don’t care, we are going to be strong,” he said to a question about whether he expected to play the Champions League quarter-final in their new stadium.

“If we are not going to receive a help from our football people in our country only I can laugh. You are going to see tomorrow why I am not so happy with the people.”

Pochettino, who has not previously received such a sanction in his seven years in English football, said last week that he would be surprised if he was punished in that way.

He said: “A ban, why? I don’t believe that it’s going to happen. I don’t think that’s going to be fair.

“I don’t believe it’s fair. But I’m going to accept if they ban me and I can’t be in the dugout against Southampton.

“I am going to accept. It’s different if it’s fair or not. I don’t believe it is but I’m going to trust the FA and accept what they say.”