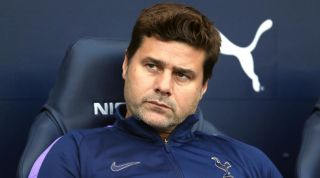 Tottenham manager Mauricio Pochettino says he does not fear the sack after his side slumped to a 3-0 loss at Brighton on Saturday.

Spurs were looking to bounce back from Tuesday’s 7-2 demolition by Bayern Munich in the Champions League but instead fell to defeat on the south coast.

Pochettino’s men have now won only three of their first 11 matches in all competitions this season, and are without a victory away from home in the Premier League since January.

But the former Southampton head coach insists he is not worried about the prospect of being dismissed by Tottenham chairman Daniel Levy.

“Football is a game that sometimes you win, sometimes you lose. The problem for us it was win, win, win and it was praise for everyone. Now in the last two games it was a tough situation to accept. But I don't want to be a philosopher or talk in a way that is not good.

“What scares me is life, not football. Football is to be strong and be brave and take decisions and to show your face when things are not good. That is what we are going to do, face the negative things and try to work hard to change this dynamic.

“I know very well that business. Only what I really know is the faith and belief are there. I am so strong with that and until the end I'm going to try to give my best. After, it is not my decision.”

Tottenham, who are now 13 points adrift of Premier League leaders Liverpool following the Reds’ 2-1 victory over Leicester, will host Watford after the international break.