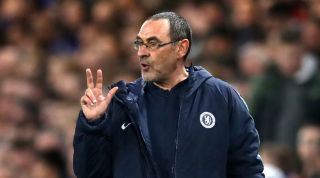 The Italian appears set to return to his home country after just one season at Stamford Bridge, in which he won the Europa League and finished third in the Premier League.

Chelsea won’t back down as they look to be financially compensated by the Serie A champions if Sarri leaves with two years remaining on his £5 million-per-year deal, reports the Daily Mail.

The former Napoli boss has already agreed terms to join the Turin club on a three-year contract worth £6.2 million-a-season and he has told the Blues that he wants to leave.

Juventus sporting director Fabio Patitici was in London on Wednesday in effort to move the deal forward.

However, last summer’s situation with Antonio Conte, when the manager wasn’t allowed to leave until mid-July and even began pre-season training with the squad despite his imminent departure, has set a precedent when it comes to Chelsea’s bullishness in negotiations.

The report claims that Sarri has already moved his belongings out of his home in Surrey in anticipation of his return to Italy, but Chelsea are happy to let the situation drag on until their demands are met.