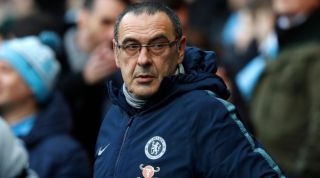 The Italian champions are on the hunt for a new head coach after announcing that Massimiliano Allegri is set to depart at the end of the season.

According to the Evening Standard, Sarri is one of the leading candidates to succeed Allegri in Turin but they won’t make an official approach until after the Blues’ final game of the season, against Arsenal in the Europa League final next week.

Sources have said the Stamford Bridge club is no longer considering sacking the Italian, who has one year left on his deal with the option of a further year, but they won’t block his departure should the 60-year-old decide he wants to leave.

However, the Premier League club would require a £5 million compensation fee to be paid to cover Sarri’s remaining salary – a demand that is unlikely to slow Juve’s advances.

The former Napoli coach led Chelsea to third place in his first season in English football, as well as the final of the Carabao Cup, where they were beaten on penalties by Manchester City.

Arsenal stand in Sarri’s way of a first major trophy on Wednesday 29 May, when the two domestic rivals meet in Baku.