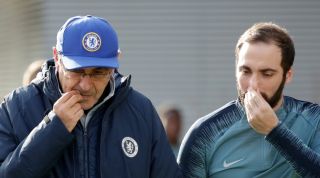 The Argentina international arrived at Stamford Bridge in January on a loan deal from Juventus until the end of the season.

He was on the scoresheet in a 3-0 win over Watford on Sunday that assured the Blues of a top four finish, the striker’s fifth goal in 13 Premier League appearances.

Sarri himself faces an uncertain future after regularly coming in for criticism during his first season in English football, but he told the BBC that the 31-year-old can help improve Chelsea’s fortunes next term.

“If he's staying then we can do very well in the next season" said the Italian, who previously worked with Higuain at Napoli.

“I don't know about Higuain's future, you have to ask the club. But for a striker it is not easy to play here, when you're used to playing in Spain and Italy.

"It's not easy to adapt to this competition because it's different physically."

Higuain spent the first half of the season on loan at AC Milan but Chelsea have the option to make his move permanent for around £32 million at the end of the season or extend his loan by a further year for a £16 million fee.

However, the west London club must wait to see if the transfer ban imposed on them by FIFA is lifted or reduced before they can make any deals.

ANALYSIS Why Maurizio Sarri could become Chelsea's most successful failure