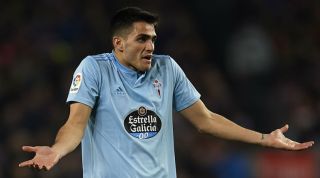 The striker has attracted attention from Liverpool and West Ham but Spurs lead the chase, according to the Daily Star.

West Ham reportedly enquired in January amid the uncertainty around Marko Arnautovic's future, but now Gomez wants Champions League football after a 13-goal season in La Liga for struggling Celta.

Maurico Pochettino wants an alternative to Harry Kane up front who can provide more serious competition and backup for the England captain.

Tottenham are aiming not to pay Gomez's full release clause of £43 million, says the report.

However, the north Londoners may end up forking out for the highly-rated 22-year-old to fend off competition from Borussia Dortmund and Atletico Madrid.

Gomez will now travel to the Copa America with Uruguay amid the rife speculation around is future.

Quiz! Can you name the 71 players with at least 40 Premier League assists?

Quiz! Can you name the 50 most recent Premier League managers?