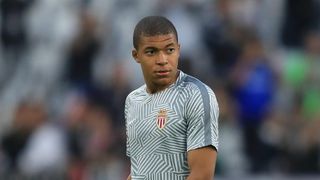 Kylian Mbappe will listen to the advice of France coach Didier Deschamps on his future as speculation Real Madrid could move for the Monaco teenager continues.

Mbappe is on international duty ahead of June fixtures against Paraguay, Sweden and England after he hit 15 league goals to fire Monaco to the Ligue 1 title.

Real Madrid defender Raphael Varane has urged Mbappe to join him at the Santiago Bernabeu but Mbappe insisted he was focusing on France as he clarified earlier comments about Zinedine Zidane, who he described as his first football idol.

"The coach is completely different, he is a great coach who has quickly achieved results and continues to develop.

"The advice of [Deschamps] counts. That will not guide my choice, but it will count. I do not think I will go to his office to ask. But there's plenty of time to think about all this. There are important matches for France."

Mbappe has been clear that he views regular starts as crucial to his development, but with Monaco struggling to retain key players - Bernardo Silva has already joined Manchester City - the 18-year-old accepted he could depart.

"Why play less?" Mbappe said. "I'll have time to reflect on that and, no, I'm not afraid to leave."