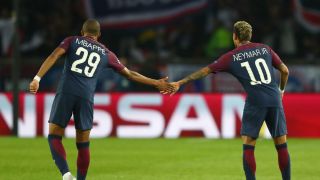 Neymar's qualities as a team player were praised by Unai Emery but the Paris Saint-Germain boss refused to rule out leaving Kylian Mbappe on the bench for Tuesday's Champions League match against Anderlecht.

Brazil superstar Neymar is set to return to the PSG line-up, having been forced to sit out last Friday's 3-0 home win over Nice after being sent off during a 2-2 draw at Marseille the previous weekend.

The €222million man has scored 10 times in 11 matches since arriving from Barcelona in August but recent questions have been raised over his commitment to the collective for the Ligue 1 leaders.

Speaking at a pre-match news conference, Emery refuted such suggestions and denied reports Neymar is disengaged during video analysis session with his team-mates.

"Neymar came here with the desire and motivation to work together with the club," he said.

"He has all the qualities needed, and he has the motivation and ambition to go higher in football – both individually and collectively.

"If I didn't do them, the players would ask for them because they know how important they are. They're a new part of football."

PSG squad for tomorrow's showdown with at the Parc des Princes   October 30, 2017

Securing the services of teenage sensation Mbappe from Monaco completed a stunning transfer window for PSG and a dream forward line alongside Neymar and Edinson Cavani.

The 18-year-old striker scored on each of his first two appearances for the capital club against Metz and Celtic but has only been able to add two more in eight subsequent outings.

Angel Di Maria came in for Neymar against Nice and the Argentina international could retain his place at Mbappe's expense on a night when they will secure a place in the last 16 if they better Celtic's result against Bayern Munich.

"He could start or not start. It's important to decide who starts, but the most important thing is respect for the players," Emery said.

"They need to know who will play, and I will tell them on Tuesday before the game."

Overall, Emery is happy with Mbappe's form and acknowledged the increased scrutiny the player is under as a marquee signing in Paris brings a new kind of pressure

"I've done a general analysis of his 10 games with us," the former Sevilla boss explained. "He chose to be here for many years, to grow with the team and reach a higher level.

"It's normal for the odd game not to go how he would like or we would like, but he's played at a great level in many games.

"That said, we have other players who can come into the team and competition is good. But I'm very happy how things are going with Kylian."

Emery added: "It's a new experience for him. When you play a great game, you read the papers and you're the best. It's normal that that can affect your mentality. But when you play a bad match, you hear criticism. It's important to stay balanced and know the right path.

"To reach a higher level, you need to be consistent and work hard during the good and bad moments. After these 10 games, he's on the right path and he's getting experience at PSG."