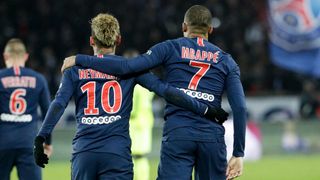 The two most expensive players in the world sat out the victory over Toulouse on Saturday having suffered injuries during the international break.

Mbappe hurt his shoulder on France duty, while Neymar sustained a groin problem early on in Brazil's 1-0 win over Cameroon.

Coach Thomas Tuchel was optimistic both would be fit to face Jurgen Klopp's side after they trained on Tuesday and the talented forwards will link up with with Edinson Cavani in attack.

Mane had been suffering with an illness but he trained the day before the game and retains his place alongside with Mohamed Salah and Roberto Firmino.

Gomez missed the weekend win at Watford with a knock, though he too features from the off having enjoyed a brilliant start to the season.

Liverpool will qualify with a win in Paris if Red Star Belgrade do not beat Napoli, while PSG will be unable to progress if they lose and the Italians triumph.

The Reds won a five-goal thriller 3-2 at Anfield in September.

How the Reds line-up in Paris.Two changes - Gomez and Milner in. TAA and Shaqiri out. November 28, 2018