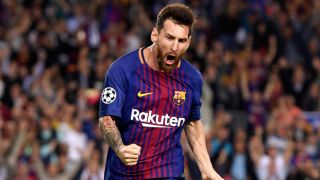 While Messi agreed to a contract extension until 2021 in July, the Barca star is yet to put pen to paper on the contract with the LaLiga giants.

Barca have continually reiterated that the 30-year-old will sign his contract and Bartomeu provided another update on Thursday.

"We will take the photo with Messi's signature, hopefully before the end of the year, but the contract has been signed by his father, who has the power of his image rights," Bartomeu told 8TV.

"This contract is signed until 2021 and he is already playing under it."

He scored twice in the 3-0 Champions League win over Juventus on Tuesday, having netted a hat-trick against Espanyol in LaLiga.

Iniesta, 33, is out of contract at the end of the season and the Spaniard is still to agree to a new deal.

However, Bartomeu said Iniesta is set to stay, adding: "The agreement with Iniesta will be special, it will be different just because it is him, I won't reveal exactly what because it is part of private negotiations, but with Ramon Sostres, we have been talking for a long time.

He added: "Iniesta isn't just a reference point for us, but also for the young supporters, he has earned the right to play here until he decides not to any more, Andres is critical to this club and the intention is that this extension will be an indefinite contract so that he can finish whenever he desires."

Barca – already four points clear of defending champions Real Madrid – are away to Getafe in LaLiga on Saturday.