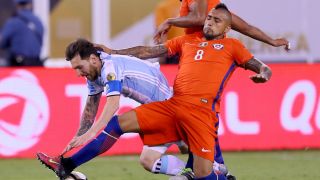 Lionel Messi having an international ban overturned by FIFA is evidence of an imbalanced playing field in football, says Chile star Arturo Vidal.

Messi was handed a four-match ban after abusing a match official during the 1-0 victory over Chile in March, ruling him out of the 2-0 loss at Bolivia and their next three 2018 World Cup qualifiers.

However, the Barcelona star is free to play in the remainder of Argentina's campaign after the sanction was wiped out on appeal.

Argentina are currently fifth in the CONMEBOL standings, a position that would send them into an inter-continental play-off against a side from Oceania.

Chile sit a point and a place above La Albiceleste and Vidal was less than impressed to see their rivals regain their captain and talisman.

"That's a difficult issue," Vidal is quoted by AND Radio. "I wish all the rules were the same for everybody.

"It's good for Argentina, for Messi and for football. It's always nice to watch Messi playing for the national team because he always gives everything, so good for him, but I wish all the rules were the same everybody."

Chile's frustrations may be exacerbated, having seen their midfielder Gary Medel handed the same ban as Messi for a similar offence and only having one game struck off on appeal.