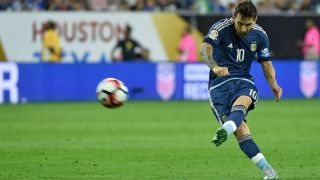 Lionel Messi has become Argentina's all-time record goalscorer after netting a sublime free-kick in their Copa America Centenario semi-final against the United States on Tuesday.

The Argentina captain had drawn level with Gabriel Batistuta's record of 54 goals with a strike against Venezuela in their 4-1 win in the quarter-finals of the competition last Saturday.

But it took Messi just 32 minutes against USA to find the net and become outright top scorer for Argentina, hitting a sensational free-kick off the underside of the crossbar, leaving goalkeeper Brad Guzan helpless.

The goal put Argentina 2-0 ahead in the contest after Ezequiel Lavezzi opened the scoring inside three minutes, with Barcelona star Messi creating the goal.

Argentina are looking to end their 23-year trophy drought at the tournament, and thanks to Messi's brilliance are well on their way to back-to-back Copa finals.