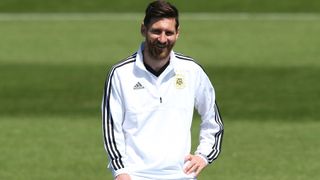 Lionel Messi is unsure if the 2018 World Cup will be his last, saying it depended on Argentina's performances in Russia.

Whether the tournament is the 30-year-old's last World Cup remains to be seen, with Messi revealing that would depend on how Argentina performed.

"In these four years we experienced important changes in the selection. In addition, it was very difficult for us to qualify for Russia, we were only able to get it in the last match in Quito [against Ecuador]," he wrote in La Nacion.

"But know that we arrived in Moscow calmly, with great enthusiasm, eager to start. We were preparing very well these weeks. We have great players and we will fight in every game.

"They ask me if it will be my last World Cup and I do not know. I do not think about it now.

"Surely it will depend on how we go this month, how we finish in the tournament."

The Barcelona star said he would give up his five Ballons d'Or for a crown with his nation.

"I already said that I would change the Ballons d'Or for a title with the national team," Messi wrote.

"And I'm not saying that they have no value, no, but the collective prizes will always be ahead of the individual. I have won a lot with Barcelona and my motivation has always been the same: to win again.

"I'll go after that in Russia. Getting a World Cup is the best for any player. It motivates me a lot to win the World Cup."