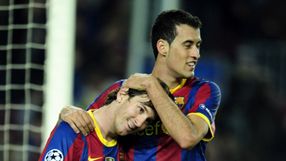 Two typically ruthless finishes earned the 2009 champions a 2-0 Group D victory over FC Copenhagen to propel Barcelona a point clear of the Danes at the top of the standings with seven from a possible nine after three games.

Messi once again proved the difference for his club as he has so often already this season after what was, by his sky-high standards, a wretched World Cup for Argentina in June.

Top scorer in last season's Champions League, the forward netted his third goal of the latest edition in the 19th minute when he controlled a pass from Andres Iniesta and lashed the ball into the top left corner from just outside the area.

The home side controlled the rest of the match comfortably enough but lacked their usual cutting edge and Messi had to wait until second-half added time for his second of the night and 27th in 35 Champions League games over the last four seasons.

A miscued shot from fullback Eric Abidal bounced over Johan Wiland and fell to Messi, who bundled it over the line with the Copenhagen keeper stranded.

"Although we had control, the murmurings in the stands were because we didn't kill off the game and we could have ended up with only a point," Barca coach Pep Guardiola said at a news conference.

"We simply didn't put the ball in the net (in the first half)," he added. "But that's the way it is sometimes and we played a good match overall."

With Xavi suffering from an ankle problem, Guardiola left the Spain playmaker out of his starting 11 and fielded Javier Mascherano, Sergio Busquets and Maxwell across the midfield.

Andres Iniesta was deployed just behind forwards Messi and David Villa and Spain striker Villa almost grabbed the lead in the fifth minute when he twisted and turned inside the area before curling a shot against the crossbar.

Copenhagen, who had never beaten a Spanish club in six previous meetings, posed more of a threat in the second half and the impressive Dame N'Doye gave Barca's Spain central defenders Gerard Pique and Carles Puyol a torrid time.

The Senegalese striker came close to a shock equaliser in the 67th when he cracked the ball against the bar from distance and Barca goalkeeper Jose Manuel Pinto, playing in place of the unwell Victor Valdes, had to be alert to deal with a long-range effort from Copenhagen captain William Kvist in the 87th.

"In the second half we managed to get a good rhythm and we had some chances," Copenhagen coach Stale Solbakken, who cut an animated figure on the touchline, told a news conference.

"The players can be proud of their performance. They were facing the best team in the world."

With three of six matches played, Barca have seven points and Copenhagen are second on six. Rubin Kazan, who held Barca 1-1 at home on matchday two, have two points and Panathinaikos one after the pair drew 0-0 in Athens on Wednesday.