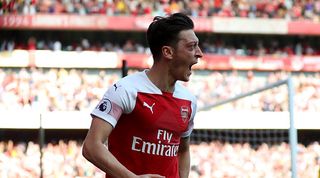 Mesut Ozil will stay at Arsenal until at least 2021, according to the player's agent.

The former Germany international fell out of favour at the Emirates Stadium in the first half of the season, with Unai Emery frequently leaving him out of his starting XI.

Ozil has forced his way back into the team in recent weeks, though, making seven starts since the start of April.

And the former Real Madrid playmaker, who is contracted at Arsenal for another two years, is set to remain in north London until his deal expires.

"Rumours will always persist, there is no doubt about that,” the player's agent, Dr Erkut Sogut, told Turkish Football.

“But one thing I can guarantee is Mesut’s loyalty. His mind is focused on Arsenal, and Arsenal only. Mesut bleeds Arsenal red, and respecting his contract is a certainty.

“He’ll be staying at Arsenal until at least 2021, and the fans need not to worry about the gossip that may come this summer. He has found a place he feels welcome and believes he has a lot more to give.”