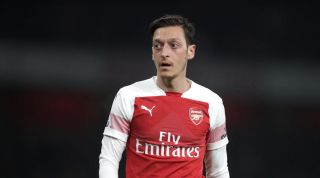 DC United are pushing hard to sign Mesut Ozil from Arsenal, according to the Daily Star.

The MLS side are seeking a big-name replacement for Wayne Rooney, who will return to English football with Derby in January.

United officials have held talks with Ozil's representatives in the United States in recent days.

And with Nicolas Pepe and Dani Ceballos having joined the Gunners' ranks this summer, there are doubts over how much meaningful action Ozil will get in 2019/20.

The former Real Madrid playmaker missed Saturday's 2-1 defeat of Burnley due to illness.

10 superb stand-ins who came in and shone unexpectedly