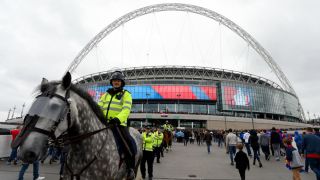 The Metropolitan Police has confirmed it will deploy extra armed officers for this weekend's FA Cup and Premiership Rugby finals in London in light of the Manchester terror attack.

A suicide bomber killed 22 people and injured another 59 at Manchester Arena following a concert by American pop star Ariana Grande on Monday.

Premier League champions Chelsea face Arsenal at Wembley as the English football season reaches its traditional conclusion with the FA Cup final on Saturday, while Wasps and Exeter Chiefs face off at Twickenham for the top prize in domestic rugby union in the country.

In a statement, the Met confirmed it would undertake a thorough review of its operations for the finals, with a provision of additional armed police already in place.

The statement read: "A full review of the security and policing operations for the weekend's sporting events - the culmination of the football and rugby seasons at Wembley and Twickenham - is underway. This will include the deployment of extra armed officers.

"Operation Hercules - which sees the deployment of a range of mobile and static overt armed officers - will be stepped up to protect the Capital. This is designed to make London as hostile an environment as possible for any would-be attacker. That means the locations, types of tactics and the numbers of officers deployed at once will continually change to be most effective and avoid predictability.

"The Met will continue to do everything possible to protect the Capital not just through the use of armed officers but the ongoing work by specialist detectives in the Counter Terrorism Command; working with partner agencies and gathering community intelligence."

Met increases number of officers on duty following the terrorist attack in May 23, 2017

Metropolitan Police commander Jane Connors said: "As the full horror of last night's attack in Manchester still sinks in, the thoughts of all of us in the Met Police are with those who have lost loved ones or who were injured.

"Here in London we are determined to do all we can to protect the Capital. That means that over the coming days, as you go to a music venue, go shopping, travel to work or head off to the fantastic sporting events, you will see more officers - including armed officers."