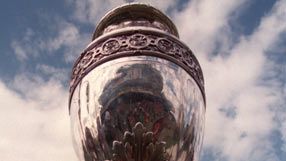 The world's oldest active tournament, no less, in modern guise: The Copa America.

The South American championship, its official name from the first time it was played in 1916, will take place in Argentina next July. Only the now defunct British Homde Championship was older.

The draw for the Copa America takes place in La Plata, capital of Buenos Aires province, on Thursday with guest teams Mexico and Japan boosting the numbers to 12.

Holders Brazil and hosts Argentina, who met in the last two finals in 2004 and 2007, and World Cup semi-finalists Uruguay will be seeded in three groups of four.

"The Copa America is going to be a very important step towards our principal objective which is the 2014 World Cup (in Brazil)," said Argentina's new coach Sergio Batista, who has taken over from Diego Maradona.

Much the same sentiment is in the minds of the other coaches in the tournament including the likes of Colombia and Peru, looking to return to the World Cup after missing recent finals.

Argentina, whose last victory was in 1993, and Uruguay are the teams with most titles, 14 each. They are followed by Brazil, five of whose eight have come in the last 21 years and four in the last five tournaments.

The Brazilians, now under coach Mano Menezes, are looking to return to their so-called beautiful game after the pragmatic years under Dunga whose tactics ultimately failed in the 2010 World Cup in South Africa.

Ronaldinho has been recalled for a friendly against Argentina in Qatar next week and Brazilian hopes are also being pinned on the blossoming of Santos youngsters Neymar and Paulo Henrique Ganso.

"(Ronaldinho) is in good form and he is a leader who will give added value to the Brazil team," Menezes said.

Mexico, who have played in every Copa America since 1993, when they lost the final to Argentina in Ecuador, are also under a new coach in Jose Manuel de la Torre.

He faces a busy year as Mexico play the Concacaf Gold Cup in June before the Copa America.

Japan, looking good under new Italian coach Alberto Zaccheroni and with a 1-0 friendly win over Argentina last month under their belts, are guests for the second time occupying a berth normally filled by the United States.

They were knocked out in the group stage in 1999 in Paraguay where they took part during the build-up to co-hosting the 2002 World Cup finals.