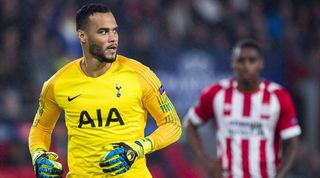 Spurs captain Lloris has been ruled out for the rest of the year after dislocating his elbow during last weekend’s 3-0 win over Brighton.

Paulo Gazzaniga is stepping up in the Frenchman’s absence, but reports in the Netherlands – backed up by Evening Standard journalist Dan Kilpatrick – claim that they are looking to bring back Vorm just months after his departure.

#thfc Per reports in Holland, Spurs are in talks with Vorm about returning on a contract until the end of the season to cover Lloris' injury.— Dan Kilpatrick (@Dan_KP) October 14, 2019

The 35-year-old left Tottenham at the end of his contract over the summer and is currently a free agent.

He has penned a deal until the end of the season to bolster Spurs’ goalkeeping options, according to NOS.

Vorm spent five seasons in north London, making 47 appearances, but failed to oust Lloris as the club’s No.1.

The former Swansea City goalkeeper featured just four times for the club last season; twice in the Champions League and twice in the Premier League.

He will join up with his former team-mates as they look to arrest an alarming slump in form.

Mauricio Pochettino’s side have lost four of their last five games in all competitions, including last weekend’s shock defeat to Brighton, a galling 7-2 thrashing at home to Bayern Munich in the Champions League, and a penalty shootout exit to League Two Colchester United in the League Cup.

They face Watford at home when the Premier League resumes on Saturday, before the visit of Red Star in the Champions League.

QUIZ! Can you name the 59 England players to earn a cap under Gareth Southgate?