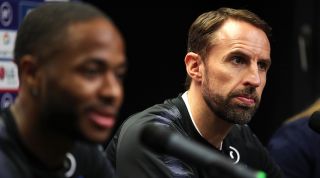 It's now just over three years since Gareth Southgate took charge of his first England senior game – a 2-0 win over Malta in October 2016. At the time we thought he was a pleasant, well-spoken but slightly sapless individual who was a bit underprepared for the big job.

We’ve since come to understand that he's much more than that – a ruthless operator who'll drop big players and won't go easy on those who he thinks need reminding of what the shirt means (inglorious disappointment at major tournaments? – Ed.)

But now he's in the midst of his first problem period. England have just lost their first qualifier in a decade, which followed a bizarre home performance against Kosovo and relatively poor showing at the Nations League finals last summer.

Each of these 59 footballers have picked up an England cap in Southgate’s reign. The below isn’t their total international caps – simply their appearances under The ’Gate, as well as their current club side.

Ten minutes are on the clock to try to name as many as you can. Let us know how your get on @FourFourTwo – we’ll retweet the best scores, if you don’t give answers away – and please challenge some friends while you’re at it.

COMMENT Forget the defence for a minute: England's midfield is the real concern right now

QUIZ! Can you name every England manager 1946-present?