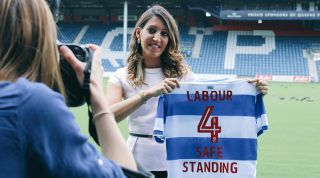 As the Shadow Sports Minister since 2016, I have spent the last couple of years working to change the law to allow safe standing at football matches. I have done this because I firmly believe that the current system is unsafe.

Sometimes the seat in front of you doesn't go above your ankles, and when a goal is scored people go flying forward. I've seen this at matches not only as a football fan, but also in countless videos of supporters ending up on the floor or being knocked unconscious.

What we are proposing is not a return to the terraces of the 1980s, but a modern and safe way for fans to stand.

I am pleased to announce that if Labour win the upcoming election, as Sports Minister I will personally ensure that safe standing is introduced in time for the 2020/21 season.

In our last manifesto, Labour pledged that sport must be run in the interests of those who participate in it and love it – not just for a privileged few – giving fans and supporters the opportunity to have a greater say in how their clubs are run.

Last year we consulted with clubs, supporters’ clubs and trusts, safety authorities and leagues to undertake a review of opinions around safe standing in football. I was proud to host a parliamentary roundtable attended by 60 supporters trusts.

Delighted that so many supporters’ trusts accepted my invitation to take part in a Parliamentary roundtable to discuss #SafeStanding today.

Any decision made must have fans at heart, this is about choice.

The decision should rest with those who know their stadiums best: fans, clubs and local authorities – not the government. Increasingly, more clubs are supporting the introduction of safe standing areas and are adapting their stadiums to be ready for a change in the law.

Clubs, fans and safety authorities should have the power to allow for a small area inside a stadium to be designated for safe standing.

Let me be clear: this is first and foremost about fan safety – the current system is just not working for supporters week in, week out. People are standing in unsafe seated areas, and accidents can – and do – happen. The options available, where appropriate, would be the installation of specialised rail seating, or standing in current seated areas where it can be made safe to do so by installing a barrier.

Safe standing would also improve the matchday experience for those who want to sit but don't want their view blocked by someone standing in front of them. This is about giving fans a proper say.

The data and extent of surveys provided by the EFL and fans' groups clearly shows that supporters want safe standing introduced. Government ministers have dragged their feet. Their recent announcement, to put the decision on hold to undertake another review, was disappointing – fans need a government that is on their side.

Football is the only sport where fans are asked to sit during games. You can go to a football match at Old Trafford on a Saturday where you are asked to sit, but can stand in seated areas without restrictions if you visit the same stadium for a Rolling Stones concert the following week.

This is a step forward for football, not a return to the 1980s. Stadiums and matchday operations have vastly improved over the last 30 years, meaning it is possible for standing areas to be introduced safely. There are plenty of examples from around Europe to prove that.

Labour’s decision is the result of in-depth consultation with football clubs, fans and safety authorities. It’s time for change; it’s time to back safe standing.

EURO 2020 Forget the defence for a minute: England's midfield is the real concern right now

QUIZ Can you name every England manager 1946-present?