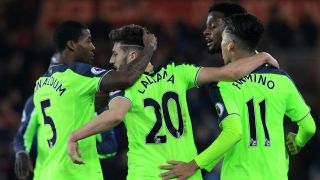 Liverpool enhanced their credentials as the Premier League's attack masters, powering through a stubborn Middlesbrough defence to win 3-0 at the Riverside Stadium.

Two Adam Lallana strikes and Divock Origi's fifth goal in as many games fired the Premier League's top scorers up to second in the table, above Arsenal by dint of their vast scoring tally.

Aitor Karanka's side conceded three goals in a home game for the first time in almost two and a half years - underlining the impressive nature of this win.

Lallana's opener put the Reds ahead during an even first half in which Simon Mignolet was a reassuring presence in goal after Jurgen Klopp axed the jittery Loris Karius.

Liverpool then made sure that Klopp's selection was justified with an electric second-half performance, scoring a pair of exceptionally worked goals to pull clear.

While Klopp's men are on the up again, Boro are just three points above the relegation zone after back-to-back scoreless defeats.

While Liverpool struggled to pick the gaps in Middlesbrough's defence early on, Mignolet passed his first two examinations by keeping hold of a skidding Fabio da Silva shot and Ben Gibson's header.

Adam Clayton snapped into a block on Sadio Mane after Adama Traore had lost possession in a perilous position, but the chance perhaps gave the Reds momentum and they duly took the lead.

Nathaniel Clyne found space on the right flank and arced a superb deep cross to the back post, where Lallana was racing in to power past Adam Forshaw and plant a firm header beyond Victor Valdes.

Mignolet was again sharp to repel Viktor Fischer's near-post drive and Liverpool ought to have been two up at the break, but Mane hit the post after breaking clear and Origi slammed a follow-up effort into the side-netting.

Mane had a pair of efforts in the opening two minutes of the second half saved by Valdes and blocked by Calum Chambers respectively as Liverpool took a more direct route to goal.

Passing aimed forwards rather than sideways paid dividends in spectacular fashion on the hour mark as a one-two between Mane and Georginio Wijnaldum opened up space and the Dutchman's return pass ran to Lallana, who squared for Origi to thump home.

Eight minutes later, victory was assured, Origi sweeping up after Mane was felled and returning the favour for Lallana with a square ball that the England midfielder finished coolly to register a fifth league goal of the season, already matching his best tally for the Reds.

There was no sign of the defensive shambles that had cost Klopp points in their last two games, Mignolet again resolute after the break, perhaps offering an early Christmas gift in Liverpool's title tilt.