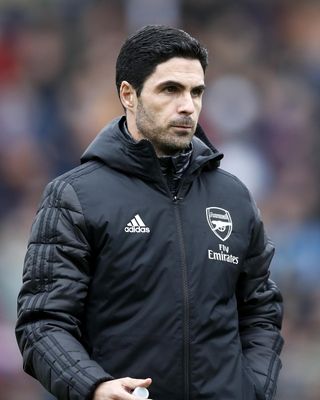 Jay Rodriguez should have won it for the Clarets with a 72nd-minute drive that ricocheted off the underside of the bar and bounced on the goal-line before being hacked to safety.

And the out-of-sorts Gunners could count themselves fortunate to escape with a point as they left Turf Moor still searching for their first Premier League win since New Year’s Day.

Arteta said: “The conditions were difficult – the grass was this long and they didn’t put any water on it, and that’s not a very helpful thing to play football.

“They (Burnley) do what they do really well, and you are allowed to do it so we have to react to that.”

The Gunners had made a good start but early misses from the recalled Pierre-Emerick Aubameyang and Alexandre Lacazette would ultimately cost them dear.

Burnley seized control and came closer through James Tarkowski and Jeff Hendrick, while Rodriguez was also guilty of spurning a good opportunity prior to his late near-miss.

Arteta was scathing of his side’s performance and knows they face some big challenges ahead if they are turn around their fortunes in the mid-season break.

The Spaniard added: “We need more consistency. We were fantastic in some moments but we were so sloppy and we put ourselves in big trouble with a lot of unnecessary situations.”

Clarets boss Sean Dyche refused to be too disappointed after seeing his side maintain a recent revival by claiming their seventh point from the last nine on offer following four straight defeats.

Dyche said: “When you come away having played like that against a top side there’s an edge to your thinking that you should have won.

“But it’s another clean sheet and another point to make it seven from three games available, and it continually shows that the players are ready for the challenge.”