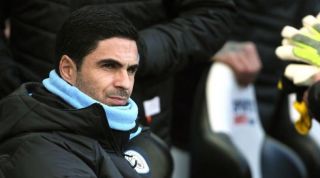 Yaya Toure has backed Mikel Arteta to be a success at Arsenal as long as the club's board follow his lead.

Arteta looks set to be appointed as the Gunners' next permanent boss after holding talks with his former club this week.

Manchester City head coach Pep Guardiola has insisted that he will not stand in his assistant's way as he seeks to begin his managerial career.

And Toure, who worked under Arteta at the Etihad Stadium towards the end of the Ivorian's City career, believes he has what it takes to deliver at the Emirates Stadium, even though he recognises it will not be a straightforward job.

"It’s going to be quite difficult,” Toure told Associated Press. “Why? Because Arsenal are struggling and I think if the directors of Arsenal listen to him and go in his way, maybe it’s going to work.

“All the time when you come in a new club which is struggling, you need the backing of your board to listen to you and do what you want. Obviously Man City have a lot more money [to spend] than Arsenal and I think it’s going to be quite complicated.

“He’s very smart and he’s achieved a lot of experience in football games. I think he’s going to be good, good, good for Arsenal because Arsenal need a manager with a new mind and a new setup.

“I was so sad when I saw the fans arguing [whether] Arsene Wenger had to leave – and now what is happening? Arsenal need a new vision of football, and I think Arteta can do it.”

A 3-0 loss to Manchester City on Sunday leaves Arsenal down in 10th place in the Premier League table, seven points adrift of the top four.

Even now, appointing Mikel Arteta as manager would be a major risk for Arsenal