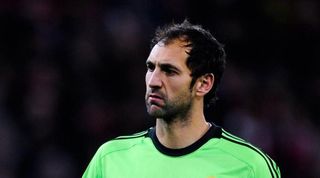 Brazilian defender Alex had to be withdrawn shortly after the hour mark to be replaced by Cristian Zapata, while Lopez's injury came about in calamitous circumstances.

The goalkeeper conceded a farcical own goal from Mattia De Sciglio's backpass and immediately looked to have hurt himself in failing to control the ball.

And on Monday Milan announced that the former Real Madrid man would be out for at least two weeks.

"AC Milan communicates the following updates regarding the injuries to Diego Lopez and Alex following the match with Parma," a brief statement read.

"The goalkeeper suffered a right thigh injury. He will be evaluated in a couple of weeks.

"The defender meanwhile is struggling with bruising to a muscle in his right thigh.

"In the following days there will be further tests to determine the prognosis."

The victory made it two wins from two for new coach Filippo Inzaghi, whose side sit top of the table.