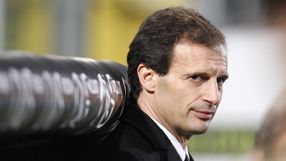 Allegri's league leaders go into Saturday's game holding a two-point advantage over their city rivals with eight matches left to play this season.

"It's the most important game of my career," he told Italy's Gazzetta dello Sport.

"It would have been nice to still have a 10-point lead but it's also nice to be in a position to experience a derby like this one. If we win we will go five points clear."

The previously unheralded Allegri took over as coach of Milan in June.

Largely unknown outside Italy, he cultivated an attractive brand of attacking football to lead unfashionable Sassuolo to promotion to Serie B in 2008 before moving on to top-flight side Cagliari.

Champions Inter are in second place, one point ahead of Napoli and four in front of Udinese.

Milan have taken just one point from their last two games and midfielder Clarence Seedorf said Saturday's match would decide the destiny of the Serie A title.

"Psychologically it means everything and whoever says otherwise is a liar," said the 34-year-old former Dutch international. "Nobody wants to leave that pitch on the losing side.

"It's been seven years since we last won the scudetto and this team has won nothing yet. We've dropped too many points of late but now is the time as we go head to head that we have to show what we are made of.

"All of the best things in the side have to come to the fore on Saturday night," added Seedorf ahead of the match at the 80,000-capacity San Siro.

Seedorf's team will be without suspended striker Zlatan Ibrahimovic, who scored a penalty to win the first Milan derby of the season for his team.

The involvement of former Milan boss Leonardo, who led the Rossoneri to third place last season, as coach of Inter adds extra spice to the occasion.

Leonardo, who replaced Rafa Benitez in December, has presided over a terrific run of results which has chopped the deficit on Milan from 13 points to two.

The Leonardo effect has revitalised the Nerazzurri who earlier in the campaign appeared to be burned out after claiming the treble last season under former coach Jose Mourinho.

"We might be considered favourites because of recent results," said Inter midfielder Dejan Stankovic who has scored six goals in Milan derbies.

"It's been a historic comeback and we don't want to stop at the vital moment. I'm sure they [Milan] will want to prove their lead all season in the championship has not been a fluke."