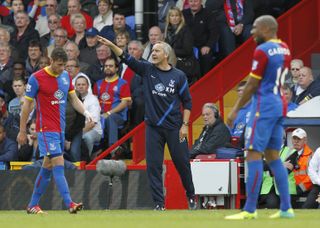 Millen, who has overseen the first team at Selhurst Park since last week's departure of Ian Holloway, led Palace to a 2-0 defeat at home to Arsenal in his first game in charge.

However, co-chairman Steve Parish seems content to leave the former Bristol City boss in charge for the time being, as the hunt continues for a new permanent manager.

"The chairman rang me on Monday to thank me for the weekend against Arsenal," Millen told the Croydon Advertiser.

"I think he’s confident enough that he doesn’t have to rush into bringing someone in, so he’s more than happy for me to continue and prepare the team for West Brom on Saturday.

"He’s happy in that sense that he doesn’t have to rush and panic into appointing someone.

"It’s nice that he’s got confidence in me to carry on with the job and it gives him more time to interview people.

"But I don’t know who he might be talking to."

And Millen insists he will be on hand to offer assistance to whoever is given the job full time, having ruled himself out of the running.

"I think the quicker someone comes in and gets to know this group and makes those decisions, the better.

"If I can help them with those decisions, that’s great. Obviously, I’ve got that inside knowledge of what the players are all about."

Former Stoke City manager Tony Pulis is currently the bookmakers' favourite for the Palace hot seat, while Martin O'Neill and Chris Coleman are also among the frontrunners.