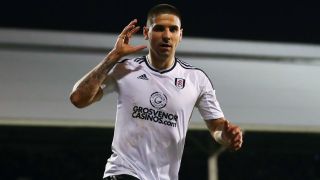 Aleksandar Mitrovic has returned to Fulham on a permanent deal from Newcastle United for a reported fee of £22million.

The striker has signed a five-year contract at Craven Cottage and will wear the number nine shirt next season.

Mitrovic joined Fulham in January on a loan deal and played a huge role in their promotion via the playoffs, scoring 12 times in only 18 starts.

"I'm very glad and happy and proud to finally be here and officially become a Fulham player. I'm happy to the moon and back," he said in an official club statement.

"I have love for the fans. They're amazing fans and I have a really good connection with them.

"This is a big club and last year we made history, we did big things, and I want to continue this. We want to keep making big things, and with all the fans behind us I think we can go far."

Fulham begin their campaign at home to Crystal Palace on August 11.