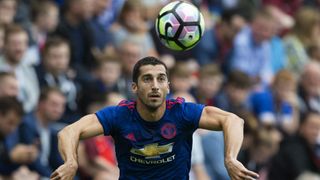 Henrikh Mkhitaryan says he does not expect to be a certain starter at Manchester United despite the significant fee paid to sign him from Borussia Dortmund.

The Armenia international moved to Old Trafford for a reported sum of £26.3million, even though he had just a year left on his contract with last season's Bundesliga runners-up.

And the 27-year-old is determined to take his own opportunity to make his mark in the Premier League, even though he does not expect to be given assurances over first-team football.

"Of course," said Mkhitaryan, when asked if Kagawa's difficulties show the level of demand at United. "In this club, you have to try and do everything to show your best qualities, otherwise you will not be here anymore.

"So that is why I'm trying to say I will do all my best and I will try to help Manchester because, for me, this is a new challenge and I like difficulties.

According to Mkhitaryan, the hefty fee paid for his services will have little to do with how much he features in his debut campaign.

"... it doesn't matter if they buy me for, I don't know, €38m or €40m, I am not guaranteed to play the games, so I am trying to do my best during the training to earn this place to play and then we will see," he said.