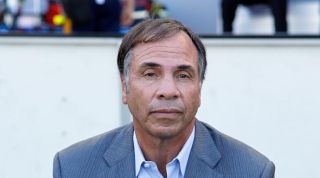 Mark Watson's Earthquakes outfit have been in freefall since the beginning of August, taking just four points during a seven-game winless run in MLS to leave them second-bottom of the Western Conference  - 10 points adrift of the MLS Cup spots.

That poor spell, which began with a 2-2 draw against their bitter state rivals the Galaxy, has all but ended San Jose's hopes of being involved in the post-season shake-up.

"As much as they were probably the better team on the night, we gave them two goals on set-pieces, which is something you can't do, especially on the road, and expect to get a result," he said.

Counterpart Bruce Arena's problems seem trivial in comparison, with the Galaxy sitting second in the division, just a point behind pacesetters the Seattle Sounders.

In stark contrast to the Earthquakes, LA have taken 16 points since the two teams met on August 9, but Arena admitted to making a tactical error in the 2-2 midweek draw against the Montreal Impact by playing three at the back.

"We don't have players that are capable of making the kind of adjustment I asked them to make to a back three, and that's my responsibility," he said.

"I'd like to see that we have players that have a little bit of a better tactical feel, but it's obvious that some of them don't and it's not the appropriate formation to play, so that's my responsibility."

The weekend's action begins with the Sounders, who have won their last three, taking on a Real Salt Lake side who sit just five points behind them.

In the Eastern Conference, there has been a reversal of form for the top two, who have been dropping points at an alarming rate of late.

Second-placed Sporting Kansas City have lost four on the bounce but have an excellent opportunity to end that run when they tackle rock-bottom Eastern Conference side Chivas USA.

Kansas can close the gap on leaders DC United, who are not in league action until next weekend, to just two points.

With the race for top-five spots heating up in both conferences, the Philadelphia Union - currently sixth in the Eastern - welcome the fourth-placed New York Red Bulls.