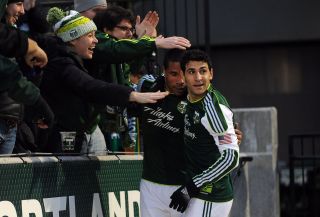 In their final match of the regular season, the Timbers thrashed Chivas USA 5-0 to claim their inaugural Western Conference Championship ahead of Real Salt Lake and enter the play-offs on an eight-game unbeaten run.

Only one side - Eastern Conference Champions New York Red Bulls - will start the play-offs with better form than the Timbers but Portland head coach Caleb Porter reckons his side can make a significant mark.

"This group is very, very hungry," Porter told the league's website on Tuesday.

"And I think they smell a little bit of blood in the water with the play-offs. And I like our chances."

In their third MLS season, Portland will make their play-offs debut against the winner of Seattle Sounders and Colorado Rapids in the Western Conference semi-finals - with the first leg set for Saturday.

The Sounders will host the Rapids on Wednesday in a one-off match for a spot in the final four in the West, while Houston Dynamo will clash with Montreal Impact in Texas on Thursday for the right to play the Red Bulls.

The Timbers head into the play-offs with the best defensive record in their conference but Porter is thrilled his team found their shooting boots against Chivas in the last round with top-scorer Diego Valeri scoring a brace.

"I wanted to open the floodgates (against Chivas) and sometimes it takes just one game to really get your attack unlocked," Porter said.

"It's perfect to get some goals before the play-offs because now that will hopefully jump start our attack."

The Red Bulls, who were awarded the Supporters' Shield for the best regular season record, could be without regular goalkeeper Luis Robles in the first leg of their Conference semi-final on Sunday, although New York head coach Mike Petke remains confident the 29-year-old will be fit.

Robles injured his left leg in a clash with teammate Ibrahim Sekagya in New York's 5-2 win over Chicago Fire, which secured them the Supporters' Shield.

"All indications are that it's not super serious," Petke said.

"It's something that's already improved over the last two days now since the game and it's going to continue to get better and he should be ready to go."

The MLS' Conference semi-finals will begin on Saturday when New England Revolution host Sporting Kansas City in the first of two legs and Portland will be in either Seattle or Colorado.

On Sunday, Real Salt Lake will travel to play Los Angeles Galaxy, while either Houston or Montreal will host New York.

The second legs will be held on November 6.