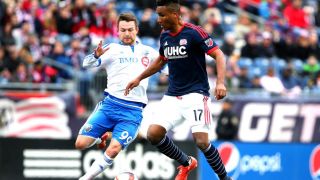 After failing to find the back of the net as they conceded five goals in a three-match winless start last campaign, the Revolution eventually reached the 2014 MLS Cup final before they lost to Los Angeles Galaxy.

Fast forward one year and Revolution are in an identical position, with the New England franchise tallying just a solitary point without scoring a goal and shipping five in the Eastern Conference.

However, Agudelo is aware it only takes one goal for their fortunes to change.

"Anything sort of may be a lucky goal," Agudelo said ahead of Saturday's hosting of the San Jose Earthquakes at Gillette Stadium. "The first goal last year was an own goal, and that opens up a lot of things.

"Once we get that first goal, I think we're going to go into a streak where we can't stop losing.

"We've created chances. I still feel like maybe we need to be a little more selfish. We've got to shoot more, even it's from distance."

Western Conference high-flyers the Earthquakes, who sit second in the standings, travel to Foxborough on the back of consecutive wins against Chicago Fire and Seattle Sounders.

The Earthquakes are three points behind conference leaders FC Dallas, who entertain the Sounders on Saturday hoping to preserve their 100 per cent record.

Dallas - led by Blas Perez and his three goals - have made a perfect start to the season, winning all three fixtures against Philadelphia Union, Sporting Kansas City and the Earthquakes.

The Sounders are coming off a bye and desperate to bounce back from their loss to the Earthquakes last time out.

Rivals New York Red Bulls and Orlando City - level on points - are also in action on the same day.

The Red Bulls are on the road against Columbus Crew, while Orlando tackle Montreal Impact away from home.

Reigning champions the Galaxy will be out to extend their unbeaten streak to four games when they face DC United in Washington.