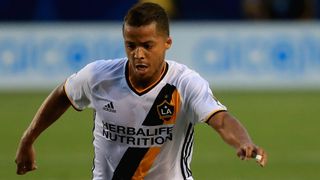 Romain Alessandrini scored twice as the Galaxy ended their four-match winless run with a 3-1 victory at Red Bull Arena on Sunday.

Giovani dos Santos was also on target, while Galaxy team-mate Bradley Diallo was shown a second yellow card in the 90th minute.

Daniel Royer pulled a goal back in stoppage time but it could not prevent the Red Bulls' 13-month home unbeaten streak from ending – a regular-season run dating back to April 2016.

The Galaxy are seventh in the Western Conference – two points outside of the play-off places – while the Red Bulls are fifth in the east.

The Timbers were held to a 1-1 draw by Atlanta United in Portland on Sunday.