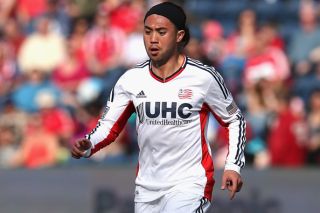 Jay Heaps' New England outfit struck twice in three minutes to claim a 2-1 win over the Montreal Impact at the Gillette Stadium.

Kelyn Rowe and Lee Nguyen were on the scoresheet as the Revolution made it five straight victories.

New England, who sit third in the Eastern Conference, fell behind in the 13th minute.

Jack McInerney squared a pass for Calum Mallace to tap into an open net and put the Impact ahead.

Just two minutes later, the Revolution were ahead as Nguyen completed a passing move with a fine chip.

The Impact – who are bottom of the Eastern Conference – had Polish defender Krzysztof Krol sent off in the 62nd minute.

The New York Red Bulls, fourth in the East, conceded a late penalty in a 2-2 draw at the Philadelphia Union.

Peguy Luyindula's penalty and Thierry Henry's goal had the Red Bulls in control late in the first half.

But Pedro Ribeiro pulled a goal back before Sebastien Le Toux's dramatic late equaliser from the penalty spot.

The Columbus Crew remain fifth after coming from behind to draw 2-2 at the Houston Dynamo.

Blas Perez's brace led Dallas to a 2-1 victory over the Vancouver Whitecaps with his first goal, a volley from near the sideline that looped over David Ousted, a contender for the best of 2014.

Toronto drew 1-1 at the Chicago Fire and the Colorado Rapids ended a seven-match losing run with a 2-2 draw against the Portland Timbers.