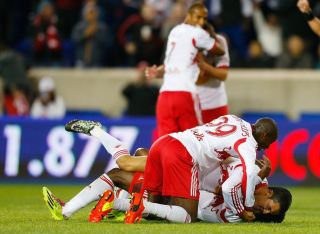 Englishman Lloyd Sam was the hero for the Red Bulls, popping up with a 90th-minute match-winner at Red Bull Arena on Wednesday.

After Fabian Espindola was controversially sent off in the 32nd minute - shown a straight red card by referee Mark Geiger for a high foot on Dax McCarty - United appeared on track for a hard-fought draw in New York.

United goalkeeper Bill Hamid pulled off a number of fine saves throughout the contest but the East leaders suffered a hammer blow in the closing stages as Sam drove forward and place the ball into the back of the net.

The result made it back-to-back wins in less than a week for the Red Bulls, who improved to fourth position with 37 points from 27 matches in the East.

New York are a point clear of sixth-placed Philadelphia Union.

Despite tasting defeat for the ninth time this season, United remain five points clear of Sporting Kansas City at the summit after 28 games.

Vancouver Whitecaps boosted their play-off hopes thanks to a 2-0 win over free-falling San Jose Earthquakes.

Pedro Morales' 39th-minute penalty and a second-half strike from Kendall Watson proved the difference in Vancouver as the Whitecaps ended their four-game winless streak.

Wednesday's victory saw the Whitecaps leapfrog Portland Timbers into the fifth and final play-off spot in the Western Conference.

The Whitecaps are now two points clear of the Timbers, while the second-bottom Earthquakes have gone seven games without victory.

East cellar-dwellers Montreal made a dream start, taking a 2-0 lead into the break courtesy of goals to veteran Marco Di Vaio and Ignacio Piatti.

However, the Impact were pegged back in the second half as the Galaxy netted two quick-fire goals.

While the draw was not enough for the Galaxy to overhaul the Seattle Sounders in the West, it was enough to consolidate second place ahead of Real Salt Lake.