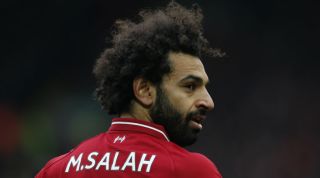 AS said that heated discussions with Jurgen Klopp had been going on for 'some time' and that Salah had asked the club to sell him in the summer window.

The player's representative Ramy Issa has slammed the suggestions as nonsense, however, and took to Twitter to call out the Spanish outlet.

Last season, Salah broke the Premier League scoring record in a 38-game season and joint-leads the charts this term with 19 league strikes.

On Wednesday, he was also included in TIME magazine's 100 most influential people list.

Real Madrid reportedly showed interest in the Egyptian last summer, but were rebuffed by the Reds.

It's claimed that Madrid would go back in for Salah should he become available, although media reports have most strongly linked them to Eden Hazard and Salah's Liverpool team-mate Sadio Mané in recent months.

Liverpool face Porto in the second leg of their Champions League quarter-final on Wednesday night.