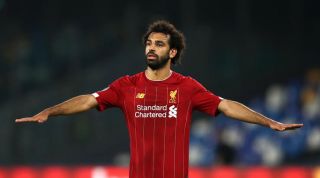 Liverpool forward Mohamed Salah insists he enjoys creating chances and laying on goals for his team-mates.

Salah was criticised earlier this season for failing to pass to Sadio Mane in a victory over Burnley.

The Senegal international was visibly frustrated with his colleague, but Salah - who has registered 23 assists in the Premier League since his arrival at Anfield in 2017 - believes people do not always appreciate his creativity.

"Sometimes people judge you only on your goals, but honestly, [the creativity] is something the gaffer thinks about and talks to me about a lot," he told Sky Sports.

"I think my team-mates are happy about it too. As long as I feel like am creating chances and giving assists for them, that's great. Maybe people don't focus much on that, but I like to give assists as well as score.

"In the last game against Tottenham, I gave Bobby [Roberto Firmino] an assist and I was really happy for him to score. Without assists - and I don't just mean my assists - you can't win games.

"Also, I can't focus too much on just scoring or finishing myself, because that means my game won't really change and my opponents will figure out how to defend against me.

"If sometimes I get the ball and create a chance or give an assist, I can confuse them. It's about being clever."

Salah also reflected on how he was forced to change his game after his record-breaking 2017/18 campaign.

The Egyptian scored 32 top-flight goals in his debut season at Anfield, more than any other player in a 38-game Premier League season.

And Salah, who found the net 22 times last term, has explained how he adapted to defenders' different methods in his second season.

"In the first year when I came here, I was playing more as a winger," he added. "Then, in the second year, it was a real challenge to see what I could do when the other teams came to defend against me on the wing, and I knew that there would always be two players waiting for me there.

"I had to change my positioning. Now, sometimes I go inside and play more in that part of the pitch, and sometimes I play No.9. It was a challenge, that change, but I think I'm doing well. I finished as top scorer for the team again last season, which is something great.

"For every game, I try to study the opponent before we play. I try to find in my head the way I'm going to score against them. I think it's working well because I have scored many goals for the team. I think there's a lot I am improving and there is a lot of room to improve more."

Liverpool, who are 14 points clear at the top of the Premier League table, host arch-rivals Manchester United on Sunday.