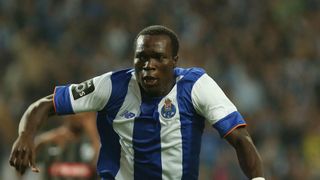 A brace from Vincent Aboubakar helped Porto get their Champions League campaign back on track with a 3-0 win over Monaco at the Stade Louis II.

Aboubakar's double and a late goal from Miguel Layun secured all three points for Sergio Conceicao's side, who move up to second in Group G and consign their opening day defeat to Beskitas to history.

Radamel Falcao had the best chance for Monaco, but saw his improvised volley crash back off the crossbar midway through the second period.

Porto held the hosts at arm's length for most of the match and the comfortable nature of the win will fill them with confidence ahead the trip to RB Leipzig in their third group game.

Monaco are still without a win and will need to arrest that run when they host Besiktas next time out if they are to have any chance of advancing in the competition.

It took five minutes for the first opening of the game to arrive, and it was little surprise that it fell to the potent Falcao.

The Colombian collected Rachid Ghezzal's pass inside the area, but his effort lacked pace or direction and was comfortably gathered by Iker Casillas.

Ghezzal was the provider again just few minutes later as he whipped a teasing cross towards Adama Diakhaby. The young striker opted to use his arm to divert the ball towards goal, though, and was duly booked by the referee.

The visitors failed to create a chance of note inside the opening half-hour, but edged ahead with their first clear sight of goal in the 31st minute.

Monaco goalkeeper Diego Benaglio kept out Danilo Pereira's initial effort and then produced an astonishing reaction save to thwart Aboubakar's follow-up shot. His luck ran out there, though, as the ball dropped to the Cameroonian again and he thrashed home into the roof of the net from close range.

Porto should then have scored a second just before the break but Yacine Brahimi was unable to keep his effort on target from Ricardo Pereira's low cross.

The second half started in low-key fashion with the first chance not coming until just before the hour.

It fell to Moussa Marega, but after breaking through a static Monaco backline he could only manage to scuff his shot into the midriff of Benaglio.

Marega then turned provider in the 69th minute as Porto scored their second.

Brahimi's incisive ball fed Marega down Monaco's right and his cool pass across goal was slotted home by the rampaging Aboubakar.

The goal sparked the hosts into life and they came agonisingly close to pulling a goal back shortly after, but Falcao's volley with the outside of his foot cannoned back off the crossbar.

It was only fitting that a dominant Porto had the final say, though, as Layun thumped home in the 89th minute after an almighty goalmouth scramble.