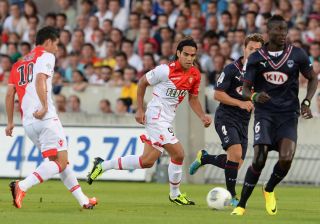 As they are based in the tax haven of Monte Carlo, Monaco, who were acquired by Russian businessman Dmitry Rybolovlev in 2011, can pay their stars huge, tax-exempt salaries, which their Ligue 1 rivals cannot match.

There is the prospect France could pass a new tax rate on incomes over €1 million of 75 per cent, greatly reducing the bargaining power of the other 19 clubs in Ligue 1.

But the French league has now ruled Monaco must relocate their headquarters to France by June 2014, making them subject to the same tax conditions as their rivals.

This has led to reports some of the club's big-name arrivals, such as Falcao, Joao Moutinho and James Rodriguez, could be forced to leave the principality-based outfit.

Spanish newspaper Marca reported on Thursday that Falcao's agent Jorge Mendes had been discussing his client with clubs such as Chelsea, Manchester United and Real Madrid.

But Monaco have taken to Twitter to say Falcao will not be leaving the Stade Louis II.

"The club deny categorically rumours around a sale of Falcao," Monaco wrote on their official Twitter account.

"(Falcao has) signed 5 years for ASMFC."