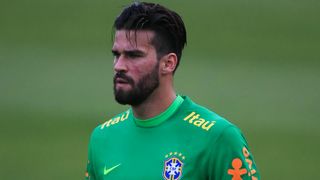 Sporting director Monchi insisted Roma have not received any offers for star goalkeeper Alisson amid reported interest from Liverpool.

Brazil international Alisson – who is preparing for the World Cup in Russia – has been linked with Liverpool again after Loris Karius' error-riddled display in the 3-1 Champions League final loss to Real Madrid on Saturday.

Signing a new keeper is set to be one of Jurgen Klopp's top priorities for Liverpool in the off-season and Alisson is believed to be on the list.

However, Monchi said there have been no bids for the 25-year-old.

"In order for a player to leave, there has to be three elements in place: an offer, a yes from the club and from the player," Monchi said.

"As of today, we have nothing of the sort."

Alisson enjoyed a stellar season, helping Roma to third in Serie A and the Champions League semi-finals.