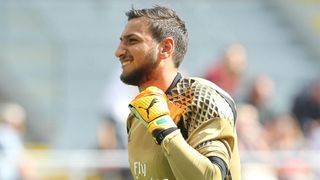 Having initially rejected an offer to extend his deal beyond 2018, Donnarumma performed a U-turn as the Italy international agreed a new four-year extension on Tuesday.

The 18-year-old had been linked with Serie A champions Juventus, Real Madrid, Manchester United and Paris Saint-Germain.

"It was a long soap opera, but the important thing was to reach the final result," Montella told MilanNews.it following Milan's 4-0 pre-season win over Lugano.

"Gigio is like a son to us, now he will need support so he can be focused and even better. Now he is to all intents and purposes a champion.

"I am happy and think that this is the right choice for him too. Over the last few days the situation had taken this route."

Donnarumma has establishing himself as Milan's undisputed first-choice keeper since making his debut as a 16-year-old.

Seen as the heir apparent to Gianluigi Buffon in the Italy team, Donnarumma featured in all 38 Serie A matches as Milan finished sixth last season.