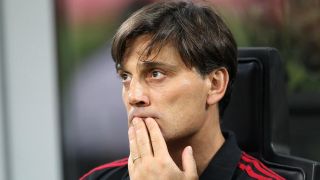 AC Milan manager Vincenzo Montella criticised his side's mental strength after they were thumped 4-1 by Lazio at the Stadio Olimpico on Sunday.

Ciro Immobile was in irresistible form, scoring a hat-trick and then turning provider for Luis Alberto to roll in a fourth.

Milan pulled one back through Riccardo Montolivo, but were comfortably kept at arm's length by a buoyant home side.

The defeat is Milan's first of the season, and Montella was left to lament a lack of mental fortitude in his players.

"It is an ugly defeat and there are many negative elements that came together," he told Mediaset Premium.

"Lazio did very well and were clinical in their finishing. We didn't have the mental strength to fight back, as everyone wanted to transform the game by themselves and not by working as a unit.

"It's true that right now Lazio are more of a team, inevitably, as they haven't changed as much as we did this summer. What we learned today is that we are still a way off being complete and in Italian football, you can't get away with anything.

"I thought on an individual level that Lucas Biglia and Montolivo had good performances. The issues were elsewhere."

The win maintains Lazio's unbeaten start to the season, and manager Simone Inzaghi hopes its resounding nature will convince people to reassess what the Biancocelesti can achieve this season.

"After today, more people will talk about Lazio. Before we beat Juventus in the Super Cup and defeated Milan here, people tended to ignore us," he said.

"This year we'll try to prove we're ready to surprise again and take one of the top spots.

"If we play like this, then we'll achieve great things. Before the game, nobody expected this result. However, having seen my team in good shape, we knew what to do."

Inzaghi reserved special praise for Immobile, who demonstrated a ruthless streak in front of goal that is going to be crucial to Lazio's success this season.

"I have no more words to describe Immobile, though I knew he would really help us out this season," he continued. "I was struck by how much he dived in to work with everyone. Now he's a leader, he has been nominated as one of our captains."