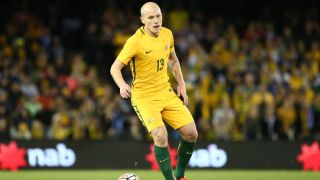 Australia midfielder Aaron Mooy is enjoying life under Ange Postecoglou, but says the coach is intimidating.

Mooy, 25, has developed into a key player for the Socceroos, earning a move to Premier League giants Manchester City before being loaned out to Huddersfield Town.

The 16-time Australia international was full of praise for Postecoglou and said the coach's possession-based style suited him.

"The style that he wants to play is the way I like playing as well. I'm happy to be playing under him. He's intimidating.

"But the way he wants to play football, I want to play like that as well. I'm enjoying it."

Postecoglou's men face Japan, Saudi Arabia, the United Arab Emirates, Iraq and Thailand in Group B in the third round of qualifying.

Mooy said he was looking forward to the challenge of the group, believing in his team's chances.

"It's definitely a tough group. There are a few hard nations in there, especially the away games are always difficult," he said.

"Hopefully, by the time the qualifiers come around, we'll be at the top of our game."