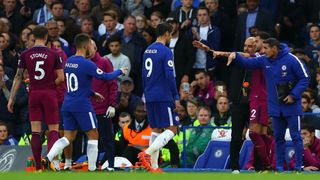 Chelsea striker Alvaro Morata was forced off before half-time during the champions' crunch Premier League clash against Manchester City with an apparent hamstring injury.

Former Juventus man Morata has scored seven goals in eight appearances for Antonio Conte's men since signing for a club record fee in the region of £60million from Real Madrid in July.

He headed an early chance over against City, who went into the weekend three points better off than Chelsea at the top of the table, but departed with the game goalless in the 35th minute.

The 24-year-old Spain international gestured a number of times to the back of his left leg and was replaced by Willian.

It's not yet clear why Morata was forced off but he looked in some discomfort as he left the field of play. September 30, 2017

Morata's seamless adaptation to life in the Premier League had come as a major boost to Conte following the exile of last season's top scorer Diego Costa, who will now join former club Atletico Madrid in January.

Spain will conclude their World Cup qualifying campaign with matches against Albania and Israel next week, while Chelsea are next in action at Crystal Palace on October 14.