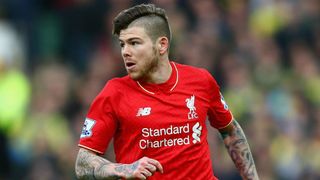 Liverpool have suffered an injury scare on the eve of their Europa League match against Manchester United after Alberto Moreno sustained an apparent hamstring injury during Wednesday's training session at Old Trafford.

Moreno completed 90 minutes at left-back as Liverpool beat United 2-0 in the first leg of the last-16 clash last week.

But the 23-year-old was seen holding his right hamstring after taking part in a crossing drill with Jurgen Klopp's team and spoke to his manager and Liverpool physiotherapist Chris Morgan before withdrawing from the action.

Rookie full-back Brad Smith could come in for Moreno as a straight swap if the Spaniard is unavailable. Jon Flanagan is not part of Liverpool's European squad.

Alternatively, right-back Nathaniel Clyne could revert to the other flank, with midfielder James Milner or centre-back Dejan Lovren deputising on the right side of defence.