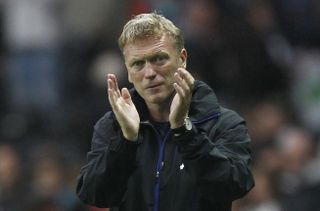 Moyes took over at Old Trafford in the close-season after the retiring Alex Ferguson left the Premier League champions following a trophy-laden 27-year spell in charge.

The Scot failed to win any silverware during his 11-year period as Everton boss - leading to questions from some quarters as to whether he is the right man to pick up the baton from his illustrious predecessor.

But Chelsea boss Mourinho feels that Moyes is not daunted by the challenge of taking over from Ferguson, and tipped him to continue United’s tradition of winning.

Speaking ahead of his side’s trip to Old Trafford in the Premier League on Monday, the Portuguese stated: "The history of Sir Alex is there forever. Is that a problem for David? I don't think so because I don't think David wants to be compared with Sir Alex.

"David is an experienced manager with years and year in the Premier League and this is the best moment of his career.

"He has maturity, experience, a big club, very good players so he is in a fantastic position and I think he is going to do very well.

"I hope he doesn't win everything and leaves something for the others, but he is in fantastic condition.

"Now he knows to be successful he has to win trophies, but he has the potential to do that."