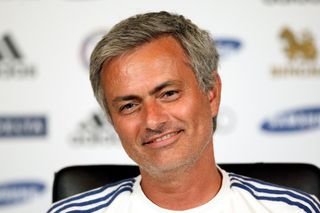 With his Russian club Anzhi Makhachkala keen to sell, Willian appears to be heading for the Premier League and a host of clubs are thought to be chasing his signature.

Liverpool showed an interest initially, although boss Brendan Rodgers has since revealed that he is likely to miss out on the 25-year-old.

Reports had also suggested that a move to Tottenham was imminent, with the winger rumoured to have got as far as completing a medical at White Hart Lane.

However, Mourinho - who is also continuing his pursuit of Manchester United striker Wayne Rooney - confirmed on Friday that he is tracking the player.

"He is an extra target (to Wayne Rooney)," the Portuguese said ahead of the Premier League clash with Manchester United on Monday. "We never close the door of adding more quality to our squad

"I think he (Willian) already made his decision."

When asked whether that decision was to join Chelsea, Mourinho refused to answer directly but nodded, before adding: "I don't like to speak before time because football can betray you.

"But I know what the player wants - in this moment we cannot hide this (that he will sign for Chelsea) is a possibility."

Mourinho also confirmed that he would not give up on his desire to add Rooney to his squad, although he warned Manchester United that Juan Mata would not be going in the other direction as part of any deal.

"He (Rooney) is their player," he added. "We are going to try to the last day to add more quality to the team.

"He (Mata) is a player we all like and want to keep.

"We want more quality in the team, we don't want less. Juan is not a player we want to lose."