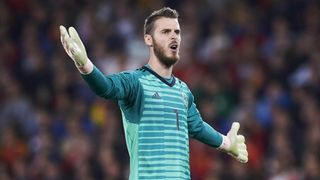 According to Jose Mourinho, David de Gea is being set up by the Spanish media to be replaced as the national team's goalkeeper, due to a "very powerful" player wanting to return.

The Red Devils' shot-stopper has been singled out for criticism over his form during the World Cup and the Nations League, and, amid questions over a potential return, Casillas stated he would "happily" play for La Roja again.

Although he did not reference Casillas by name, Mourinho steadfastly backed De Gea, calling him the best goalkeeper in the world.

"Why criticism in Spain? Do you know? I know," the Portuguese said. "Because there is somebody very powerful that is thinking about jumping [in] again, but I think it's very difficult to jump [in] when you have the best goalkeeper in the world in front of you."

Acknowledging that he was speaking about a player "in the media", Mourinho all but confirmed Casillas' identity by adding that the player in question was part of his team at Real Madrid.

"Yeah, I like him. I was a champion with him," the Portuguese said.

Mourinho and Casillas won LaLiga with Real Madrid in 2012, before an acrimonious end to their relationship preceded Mourinho's departure in 2013.

Casillas' most recent remarks about a possible return for Spain were made during a television appearance, in which he was interviewed by his wife Sara Carbonero, a journalist for Telecinco.

In the interview, Casillas admitted he should have been more assertive with Mourinho during difficult periods in Madrid.

In response, Mourinho was far from diplomatic.

"It seems like an interview with someone who is at the end of their career," he told Portuguese newspaper Record.

"But when it comes to me, when he says he has never confronted me, that is not the truth.

"He did it in a way that no one does better than him – secretly."