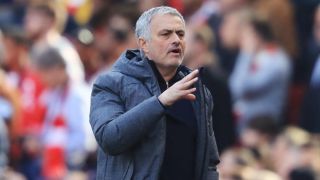 Manager Jose Mourinho has revealed the players in contention to face Palace as he rings the changes ahead of next Wednesday's Europa League final against Ajax, with other young stars Scott McTominay, Joel Pereira and Axel Tuanzebe also set to play.

He will field youngsters alongside "three or four" first-team options, Paul Pogba one of the stars who will be included, with number four goalkeeper Kieran O'Hara set to back up Pereira, while Timothy Fosu-Mensah is back from injury.

Asked who was in contention, Mourinho said: "You will have the two goalkeepers, Joel Pereira and Kieran O'Hara.

"We will have Demi Mitchell, Scott McTominay, Josh Harrop, Matty Willock, Angel Gomes, Zachary Dearnley, I think that is it. Plus, Tim Fosu-Mensah and Axel Tuanzebe.

"Fosu-Mensah plays Sunday and if the reaction is good then he is a new option for the final.

"I will bring three or four of the first-team players, to play one half each one. I can give a little bit of experience to the team but, at the same time, save them all for Wednesday.

"For the kids it will be a great experience to play in the Premier League in the last match of the season. It will be a big occasion but I think the best for the young player is in the middle of an experienced structure, where he can be supported.

"To play so many kids at the same time I don't think it is good because there is a big difference in quality, strength and experience."

Mourinho had previously confirmed Pogba would return having had a spell away from the team on compassionate grounds following the death of his father, but Wayne Rooney is set to be rested, while Chris Smalling has a minor problem.

The United boss said: "Paul Pogba is fine. Strong guy. Strong mentality. He is learning how to live after his father passed away but he is strong and he knows that he needs to play next Sunday because he doesn't play, doesn't train for a long time and he needs minutes on the pitch. He plays against Palace.

"I don't know about Wayne or not. He played 90 minutes in the last match, so probably not.

"Smalling has a problem, a small problem that I think it is no problem for next week, but is a problem for the weekend. Marouane Fellaini is a question mark. We wait for the scans."